It dates back over 200 years, has a prize pot that makes Powerball look like a village raffle and has children singing the results in the way that High School Musical might conduct an FA Cup draw. To say that Spain’s ‘El Gordo’ Christmas lottery is not like other lotteries would be to admit that Donald Trump is not like other US presidents, but at least with Loteria de Navidad the only glimpse of a wall comes in the keenly-anticipated annual advert.

Continue reading below or click the picture to see the full El Gordo Navidad infographic. 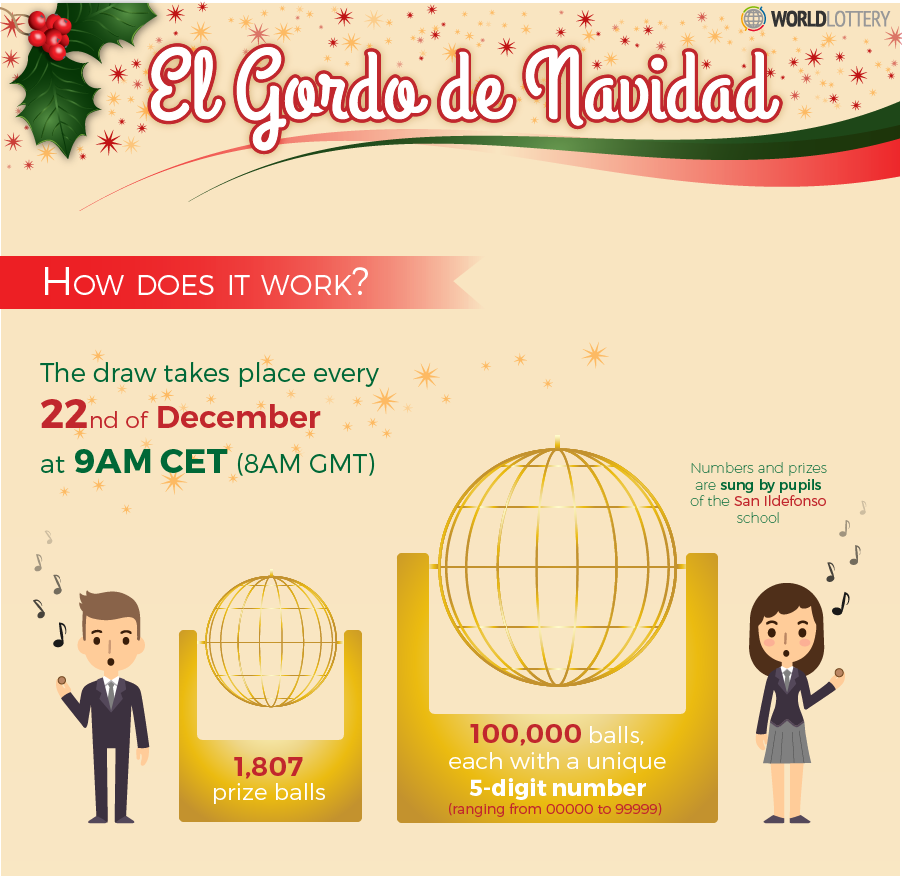 Here’s everything you need to know about the game:

When Does it Take Place?

The draw will be held on 22nd December this year, the same as always, and promises to once again create thousands of big winners.

What is El Gordo Navidad?

El Gordo, translated as ‘the Fat One’, is a nickname given both to the lottery itself and the name of the top prize.

How Does It Work?

El Gordo Navidad is more like a raffle than a traditional lottery. Each ticket comes with a random five-digit number and is split into tenths. Players can decide to either buy a tenth of a ticket, known as a decimo, or a full ticket (billete).

Each ticket number is printed multiple times in what is known as a series, so there will be lots of players all with the same number. In 2015, there were as many as 180 billetes in each series.

When the draw takes place, there are two huge machines, called ‘bombos’, containing thousands of balls. One machine holds the numbers, and the other contains balls determining the value of the prizes. A ball is drawn from each bombo simultaneously, so that players can see whether they have matched the winning number and instantly find out how much they will receive.

The top prize, for example, is worth €4 million per billete. In this scenario, everyone who has bought one billete will win €4 million each, and there could be up to 180 separate winners of the full amount if all the tickets in the series have been sold. A player who buys one decimo rather than a billete will win €400,000 if they land the top prize.

Find out more about Loteria de Navidad, including the main prizes given out.

Why it’s such a big deal

El Gordo has become a national institution in Spain, attracting a huge TV audience every year.  The biggest difference to a normal lottery is the level of pomp and ceremony, with draws taking hours to complete as children from San Ildefonso School in Madrid select the balls and sing the results. The annual advert for the game has become a traditional signal that Christmas is around the corner in the same way that the John Lewis commercial is eagerly awaited in the UK, with this year’s effort a heart-warming five-minute story of how one town comes together to support an El Gordo player.

One of the reasons the game is so popular is that ticket holders usually enjoy success together. It is common for players to join forces, either in a work or family syndicate, to share the cost of taking part. As tickets in the same series are usually distributed together to local retailers, it is common for whole communities to prosper if their numbers come up.

The fact that so many rewards are guaranteed also ensures that more than two-thirds of the money spent on tickets is returned to players - the total prize pot adds up to more than €2 billion, making it the biggest lottery in the world.

Anyone can play as long as they are legally old enough and there are still tickets available. You don’t even have to be Spanish or live in Spain to take part, as the game can be played online from anywhere in the world.